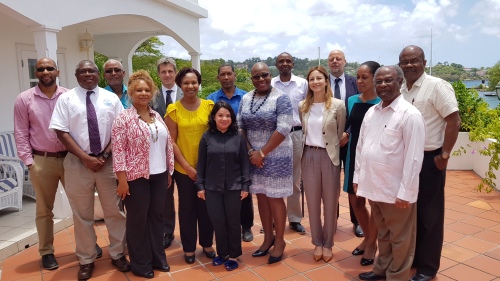 Photo shows participants in a series of meetings to discuss the development of an early warning system for St Lucia. The project is being funded by the Government of Italy through the Ministry of Environment, Land and Sea – Contributed photo

The Caribbean Community Climate Change Centre (CCCCC) and representatives from the Governments of Italy and Saint Lucia held a series of meetings this week, to discuss the development of an early warning system (EWS) for the island.

The Project is being funded by the Government of Italy through its Ministry of Environment, Land and Sea. Using geographic information, the system is expected to forecast the potential effects of national disasters, provide flood mapping and other sector- relevant and necessary information to aid decision-making during events. As the primary stakeholder, the Government of Saint Lucia would be responsible for the operation and management of the system, thereby allowing the country to adequately prepare for major events and conduct comprehensive post-disaster assessments.

Speaking at the meeting Minister of Education, Innovation, Gender Relations and Sustainable Development the Hon Dr. Gail Rigobert, emphasised the Government’s commitment to the initiative and reiterated the necessity of the system for development planning within the challenges presented by climate change.

By caribbeanclimate in News on May 11, 2018.
← Addressing Vulnerability Through Adaptation Measures in Belize Coral reef early warning system deployed in Soufriere →