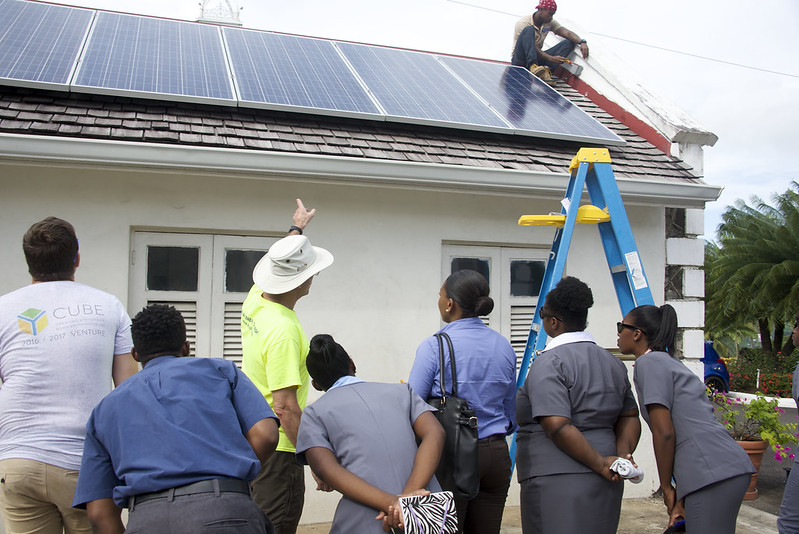 PRESS RELEASE – The Government of Saint Lucia has a target of generating 35% of its electricity from renewable sources by 2020. This pristine island currently depends on dirty diesel generators for power, but has ambitious goals to revolutionize its economy with solar, wind, and geothermal energy. Solar represents the easiest attainable resource, and Saint Lucia is already famous for its sunshine, which draws visitors from around the world.

To mark the start of its own renewable revolution, the Government of Saint Lucia has partnered with the non-profit Solar Head of State to install solar panels on the public residence of the Governor-General, Government House. Solar Head of State’s mission is to help world leaders to role-models in environmental stewardship by encouraging the adoption of solar PV on prominent government buildings. Saint Lucia’s officials first announced their intention to install the panels on the Government House at the Paris COP21 Climate Conference in December 2015.

Saint Lucia’s recently appointed Minister, with responsibility for Renewable Energy, Hon. Dr. Gale Rigobert, said, “The commitment of Saint Lucia to transit from dependence on fossil fuels to more renewable sources of energy is demonstrated here by this project to install solar panels at the Governor General’s official residence.”

The plan will also help to reduce energy costs for citizens of Saint Lucia which, like most island nations, suffers from astronomically high electricity costs that hinder economic development. The government, in collaboration with the local electricity utility LUCELEC, is currently completing the bidding process on its first utility scale installation, a 3MW solar PV facility that will power 5-8% of the national energy demand.

Solar Head of State assembled an international consortium of project donors from across the clean energy sector to carry out the project. Major contributions were received from California-based solar installation company Sungevity and from the California Clean Energy Fund. Panels were donated by manufacturer Trina Solar and inverters from Enphase Energy. Support was also received from Elms Consulting, a London-based strategic consulting firm working to accelerate sustainable development on islands. Australian firms Wattwatchers and Solar Analytics provided system-monitoring expertise and equipment.

The engineering and construction was donated by British Virgin Islands based Free Island Energy; and Saint Lucian company Noah Energy. Strategic partners include the Rocky Mountain Institute, the Carbon War Room, and the Clinton Climate Initiative.

“This is a terrific opportunity to help grow the local economy and create local jobs. Free Island Energy and Noah Energy trained local trades to build this project, and now there are trained solar technicians in Saint Lucia – keeping money and skilled jobs on the island,” said Marc Lopata, President of Free Island Energy.

Solar Head of State also has won support from globally prominent sustainability and renewable energy champions including high-profile entrepreneur and adventurer, Sir Richard Branson; environmentalist and founder of 350.org, Bill McKibben; and former Maldives President Mohamed Nasheed, who became the first 21st century solar head of state when he put an 11.5kW solar system on his Presidential Palace in 2010.

Sir Richard Branson, a long-time supporter of Caribbean efforts to use renewable energy commented “It’s wonderful to see this type of leadership for a cleaner and brighter future in this region that I love so much – and from a small island too! Congratulations, Saint Lucia and Solar Head of State on this fantastic initiative that sends a positive and strong message to the world.”

Danny Kennedy, author of ‘Rooftop Revolution’ and Sungevity co-founder, played a key role in both the installation of solar on Nasheed’s Presidential Palace in the Maldives in 2010, and in pressing President Obama to bring solar back to The White House in 2011. Now he hopes this campaign will go global and world leaders everywhere will take the initiative to install solar on their residences.

“There will be a time when not using solar will be unthinkable for any elected leader, and it is closer than many people think,” said Kennedy. “Once they get the opportunity to have rooftop solar, people love it. But at the start of the solar uptake process, support from governments and leadership by example from political leaders is vital to building early momentum.”

“That’s why the example being set by the Government of Saint Lucia to accelerate the adoption of clean energy in the Caribbean, is so important. It’s one roof today, but will be many over the years ahead. The rooftop revolution has come to Saint Lucia.”

Starting with Saint Lucia, Solar Head of State’s smart solar roll-out is focused on five small states in the Caribbean this year and early next year. Then the campaign will be looking further afield to Asia and the Pacific islands towards the end of 2017 and beyond.