Flooding from extreme rainfall events is one of the major natural hazards affecting Jamaica and other small island states in the Caribbean. Jamaica has already experienced several major floods and climate-related hazards in the last decade; the social and economic cost of which has been estimated at US$18.6 billion. Clearly, increased in the intensity and frequency of extreme weather events associated with climate change are a major risk to national infrastructure, development progress and the welfare of vulnerable communities.

Despite this very real threat, current flood maps in Jamaica are out of date, education on flood safety is poor and adaptive capacity in flood-prone communities is low. A new project, implemented by the University of the West Indies (UWI), Mona, is attempting to tackle these deficiencies.

In this webinar, hosted by CDKN, Dr. Arpita Mandal of UWI will present the results from this research project which focuses on the vulnerable communities along the the Yallahs river, as well as communities around the Orange River watershed in Negril. The project aims to create improved flood-preparedness models for these two watersheds, using information from past extreme rainfall events to create maps to plan for future flood risk. The ultimate goal was to model extreme events and create five, ten and twenty-five-year flood risk maps for both present and future climate projections. In the webinar Dr Mandal will also discuss about the importance of working with communities and adapt the results of models to their daily lives and the challenges that they are facing as a result of climate change. These map-based decision-making tool are designed to assist policy-makers in creating or revising effective flood mitigation measures, evacuation strategies and national disaster risk management plans. This will also help determine the adaptation measures that can be adopted by communities to respond to increasing flood risk, and protect those most vulnerable.

After registering, you will receive a confirmation email containing information about joining the webinar.

The Flooding Project in Jamaica was funded by CDKN and managed by CARIBSAVE. It was a collaborative research between Arpita Mandal of Dept of Geography and Geology, UWI Mona, Dr Matthew Wilson of Dept of Geograny, University of the West Indies, St Augustine, Trinidad and Tobago, Climate Studies Group, UWI MONA Jamaica, David Smith of Institute of Sustainable Development, UWI MONA, Jamaica Conservation and Development Trust and Dr Arpita Nandi of East Tennessee State University, USA.

Fishers of Bluefields Bay tell stories of a time when the coral grew so high parts of the reef were impassable, when boats had to navigate around the coral tips emerging out of the Caribbean’s blue waters. Four decades later a trip underwater will show you a seafloor still covered with the skeletons of these same corals. Due to the effects of hurricanes, decline of algae grazers and climate change, the once lush thicket is only a story told around a bottle of Red Stripe beer and a cup of fish soup (since the fish is too scarce to cook any other way).

Until now. The climate isn’t the only thing changing for some communities around the Caribbean. In Bluefields Bay, Jamaica, the community has come together with the Government to establish one of the fourteen (14) fish sanctuaries island wide. Since 2009, the community based organisation, Bluefields Bay Fishermen’s Friendly Society (BBFFS) has managed the sanctuary with enforcement, public awareness and community engagement. Many of the sanctuary Wardens are former or part-time fishers who can tell the stories of what it used to be like, and now the stories of how things are changing for the better.

A new chapter has started for this community – one of partnerships and growth – and one which hopefully will bring the old memories of corals back to life again. The branching species of coral – Elkhorn coral ( Acropora cervicornis) and Staghorn coral ( Acropora palmata) – which are now listed as threatened under the Endangered Species Act (ESA) have long been known to provide a good habitat for fish, and provide shoreline protection from storm surges (see reference).  They, along with the Fire coral (Millepora complanata), have more recently been used by the Coral Restoration Foundation International (CRFI) in large scale restoration projects in the region.

Photo Credit: A. cervicornis located in or near the Bluefields Bay fish sanctuary. Photos by K. Nedimyer and M. McNaught.

Photo Credit: A. palmata located in or near the Bluefields Bay fish sanctuary. Photos by K. Nedimyer and M. McNaught. 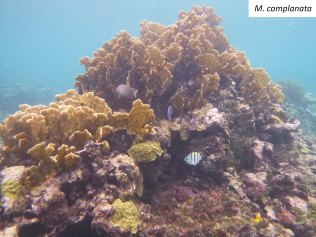 Photo Credit: M. complanata located in or near the Bluefields Bay fish sanctuary. Photos by K. Nedimyer and M. McNaught.

In early 2015, CRFI in partnership with CARIBSAVE, Sandals Foundation, the Fisheries Division and BBFFS completed the installation of a coral garden at Bluefields Bay’s – the first of its kind on Jamaica’s south coast. This was done through funding provided by National Fish and Wildlife Foundation (NFWF) and with co-funding from CARIBSAVE’s C-FISH Initiative. 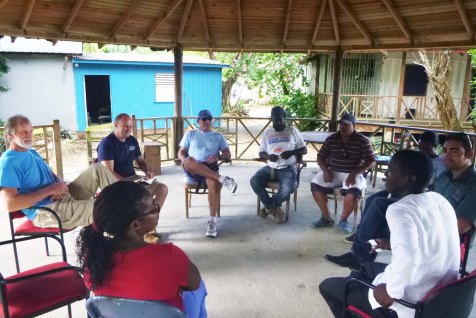 Photo Credit: Meetings between BBFFS, CRFI, CARIBSAVE and Sandals Foundations prior to the installation trip. Photo by M. McNaught.

Photo Credit: Members of BBFFS and Bluefields Bay community piece together one of the coral trees that will be installed in the bay. Photo by S. Lee.

During this time, 12 persons from a wide range of stakeholders including fishermen were trained in the techniques of ‘coral gardening’.  They also participated in the processes needed to assemble and install the coral nursery, such as searching for, fragmenting (coined as ‘fragging’) and hanging of the corals. A total of 1324 coral fragments or nubbins from 25 different colonies were hung in the nursery. Over the course of the next few months the coral fragments should grow, and when large enough will be out-planted to the reefs. 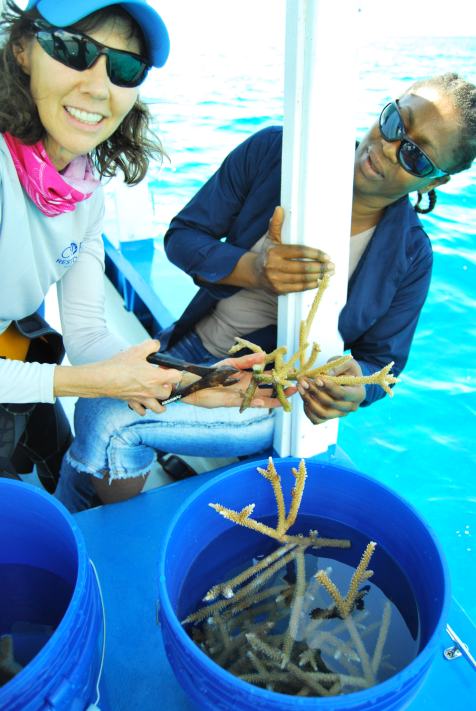 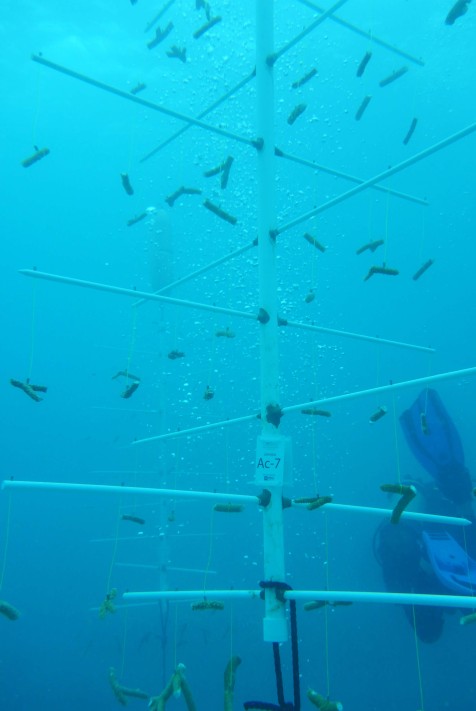 As a beneficiary of the C-FISH Initiative, the Bluefields Bay fish sanctuary has shown great promise in being a successful flagship site and this is yet another step on the road to the promising future.

Special thanks to the Government of Jamaica (The Fisheries Division and National Environment and Planning Agency (NEPA)) who recognized the importance of this activity and gave invaluable support; to Sandals Foundation who provided assistance; to the team from CRFI who shared their passion and expertise; and to the fishers and wardens who volunteered with great enthusiasm and dedication and were a big asset and source of inspiration and encouragement.

Credit: C-Fish
The Caribbean Fish Sanctuary Partnership Initiative (C-FISH) is a project aimed at strengthening community-based fish sanctuaries by providing resources, training and alternative livelihood opportunities in 5 Countries across the Caribbean. The C-FISH Initiative (£2.1 million) is funded by the UK’s Department For International Development (DFID) through the Caribbean Community Climate Change Centre (CCCCC) and is coordinated by The CARIBSAVE Partnership.

A video about the Galleon Fish Sanctuary won first prize in the ‘Documentary’ category during “Cinefish” at the the Gulf and Caribbean Fisheries Institute (GCFI) conference in Barbados last month. The Galleon Fish Sanctuary is supported by the Caribbean Fish Sanctuary Partnership Initiative (C-FISH), a project aimed at strengthening community-based fish sanctuaries by providing resources, training and alternative livelihood opportunities in 5 Countries across the Caribbean. The C-FISH Initiative (£2.1 million) is funded by the UK’s Department For International Development (DFID) through the Caribbean Community Climate Change Centre (CCCCC) and is coordinated by The CARIBSAVE Partnership.

More information on the Galleon Beach fish sanctuary is on C-FISH website at:

Did you know that a Parrot Fish can produce as much as 7 tons of sand in its life time? Learn more about our collaborative work to secure Caribbean fish sanctuaries by watching the Caribsave video below.

** Caribsave is a Not-For-Profit regional organization with its headquarters in Barbados. Caribsave was formed in 2008 as a partnership initiative between the Caribbean Community Climate Change Centre (CCCCC) and the University of Oxford.