Canada prides itself as a champion of multilateralism, peace, security and sustainable development. However, its commitment to global climate action, the world’s most emblematic indicator of these issues, is at best inconsistent with this legacy.

While carbon trading and broader market approaches can play a role, they are insufficient. They lack transparency and robust monitoring, which can risk the very lives of vulnerable populations when exploited by countries like Australia.

A climate policy premised on business development focuses on the domestic development of technologies and tools to address climate change challenges. This promotes national economic interests at the expense of increasing the resiliency of vulnerable populations.

Failure to encourage greater collaboration on the development and transfer of climate-smart technologies with vulnerable states like Tuvalu in the south Pacific undermines the spirit and promise of the Paris Agreement.

Canada’s responsibility to lead is not just moral. Alongside its history of undermining global action, Canada is the top per capita emitter among G20 countries, the world’s seventh largest emitter overall even with its relatively modest population and is among just a few countries poised to benefit economically from climate change.

If Canada is serious about showing the world that it’s committed to bold global climate action and building its legacy of multilateralism, there are three significant actions it must take:

1. Align with the Paris Agreement

Canada must embrace ambitious global action by aligning its national plan with the Paris Agreement goal of limiting global temperature rise to 1.5C this century rather than doggedly adhering to the compromise of 2C.

The report by the Intergovernmental Panel on Climate Change — which was mandated by the Paris Agreement — and the panel’s recently released Climate Change and Land Reportmakes clear that discounting the 1.5C threshold is tantamount to accepting the worst-case scenario: sacrificing whole swaths of the globe.

The impact on food security, cultural preservation and access to basic education and health services will be profound.

Canada ought to champion the United Nations Framework Convention on Climate Change (UNFCCC) process to ensure the very survival of vulnerable countries. Staying below 1.5C means staying within a global carbon budget. Annual global emissions must drop by about 50 per cent on 2010 levels by 2030, then reach net zero by 2050. We absolutely cannot afford to allow carbon trading systems to undermine the cumulative national progress made under the Paris Agreement.

After years of carbon offsetting, Canada should seize the promise of the UNFCCC’s calls to action to encourage countries to do better in their efforts to mitigate the effects of climate change. Canada should champion multilateral approaches to the global economy amid an uncertain diplomatic environment.

Canada must also push for international support for countries and regions that are disproportionately impacted by climate change and have limited resources to act.This is paramount, because climate change disproportionately impacts poor countries and exacerbates their historical disadvantages produced through the slave trade and the legacies of colonialism, including forced displacement. Additionally, good faith climate actions are reparatory, as climate change chiefly affects those least responsible for contributing to it.

Most tangibly, Canada should lead the urgent replenishment and expansion of the Green Climate Fund (GCF), the multilateral climate financing mechanism. Climate action, and the Paris Agreement itself, depend on substantial climate financing. The GCF is the largest provider of technical and institutional support and training. It’s critical in helping developing countries implement their obligations under the Paris Agreement.

In its brief existence, the fund has mobilized US$5 billion for climate action in nearly 100 countries, which will avert 1.5 billion tonnes of CO2 and help more than 310 million people thrive.

However, the GCF has allocated nearly all of the contributions it received during its initial launch. More than half of GCF projects are already being implemented. The world must safeguard and encourage the fund’s unique ability to support transformative climate action in countries most in need.

Canada responsibly honoured its pledge of $300 million at the fund’s launch, more than a third of which consisted of loans.

While Canada was the 10th largest contributor to the fund, its support is only credible relative to its rank as the world’s 11th largest economy. Canada’s commitment to global climate financing through the GCF must reflect its responsibility as the world’s seventh largest emitter and the worst in the G20 per capita. 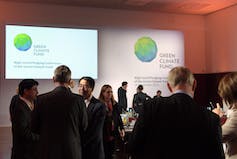 Delegates and participants of the Green Climate Fund talk to each other prior the meeting in Berlin, Germany in November 2014. (AP Photo/dpa,Rainer Jensen)

Canada’s rare position as an economic beneficiary of climate change requires it to lead an ambitious and successful replenishment of the GCF. Fundamentally, the fund’s replenishment is a matter of principle. It means all wealthy nations must honour their commitment to provide $100 billion annually in new resources by 2020, a window of action that is rapidly closing.

As a wealthy nation with global diplomatic and multilateral influence, Canada is among a small subset of nations uniquely positioned to act individually and collaboratively. Where do we stand at this moment of global dithering and existential precarity on climate change? 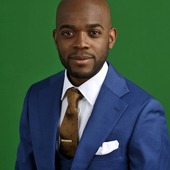 Dr. Tyrone Hall is an advisor to the Chair of the Alliance of Small Island Developing States, a 44 country body that champions the interests of small island states within the United Nations system on climate change and sustainable development. His Vanier Canada Graduate Scholarship supported doctoral work examined campaign and negotiation processes in relation to the landmark Paris Agreement on Climate Change, alongside communication processes in 17 indigenous and traditional villages across three continents.