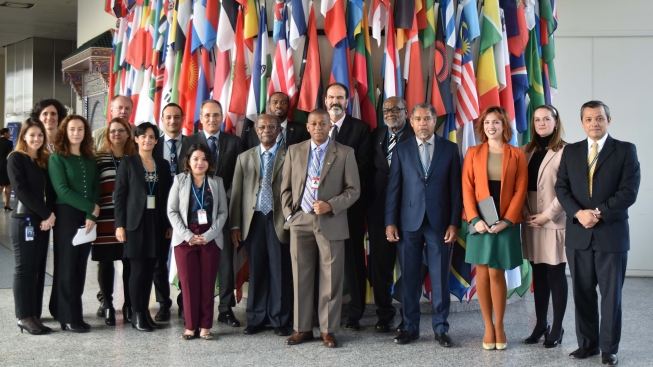 Senior representatives of the Caribbean Community Climate Change Center, visiting the IAEA headquarters in Vienna, with staff from the IAEA Division for Latin America and the Caribbean. (Photo: IAEA)

Senior representatives of the Caribbean Community Climate Change Center (CCCCC) visited the IAEA and its laboratories to discuss areas for cooperation with the Agency. The Center, based in Belize, was established in 2002 by the Caribbean Community (CARICOM) Heads of Government and officially opened in August 2005. The CCCCC plays an important role in coordinating the Caribbean region’s response to climate change, working on effective solutions to combat the environmental impacts of climate change and global warming through numerous projects and scientific research.  The visit of the CCCCC took place 30 October to 3 November.

“The Caribbean region’s primary concern is adapting to climate change and events such as the recent hurricane. The IAEA has exposed us to new methods, techniques and tools developed by its laboratories in Monaco and Seibersdorf to address these issues with regards to sustainable development.”

David Osborn, Director of the laboratories, welcomed the delegates and provided an overview of how various nuclear and isotopic techniques can contribute to Member States’ efforts to protect the environment. Monitoring the presence of marine contaminants and understanding the impact of ocean acidification are among several potential areas for cooperation between the CCCCC and the IAEA which were subsequently discussed. The CCCCC delegation also highlighted the need to connect environmental challenges in the Caribbean with the socioeconomic issues of the region.

This was followed by a tour of the Monaco laboratories to see first-hand how scientists at the IAEA can assist Member States by providing the necessary information for more precise and effective environmental management, and by building Member State capacities in applying nuclear technology in this field. 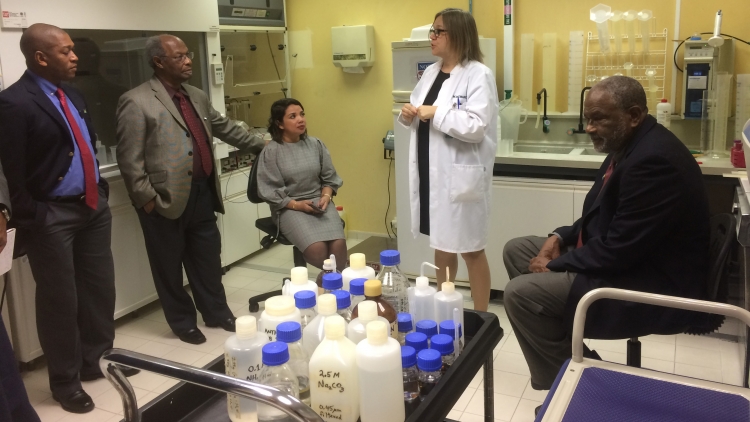 Delegates from the CCCCC meet with scientists from the IAEA Environment Laboratories in Monaco. (Photo: IAEA)

The workshop was held  to establish a base for discussion and partnership development between the CCCCC and the IAEA in the upcoming years, for the benefit of the Caribbean Community. 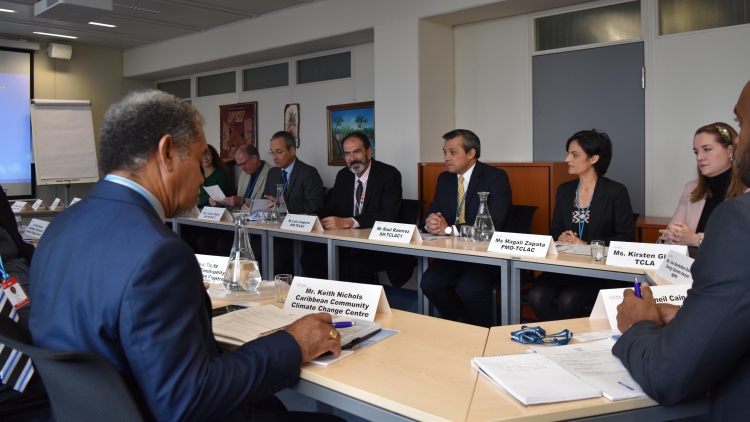 At the opening of the workshop, Mr. Longoria, Director of TCLAC, highlighted the importance of this meeting: “The IAEA looks forward to identifying areas for cooperation between our agencies to support Caribbean countries in their efforts to address immediate and long term vulnerabilities to climate change in the region, and to contribute towards strenghtening Caribbean countries’ resilience and sustainable development. It is the IAEA’s goal to support your work and find synergies for cooperation and exchange of information in order to support the region’s efforts towards achieving the Sustainable Development Goals”.

The CCCCC delegation also visited the IAEA Isotope Hydrology Laboratory at IAEA Headquarters to learn more about the use of isotopes in measuring precipitation and in water resource management, and the IAEA Laboratories in Seibersdorf, where they were introduced to the role of nuclear technology in insect pest control, plant breeding and genetics, soil and water management and crop nutrition, as well as in food production and environmental protection. 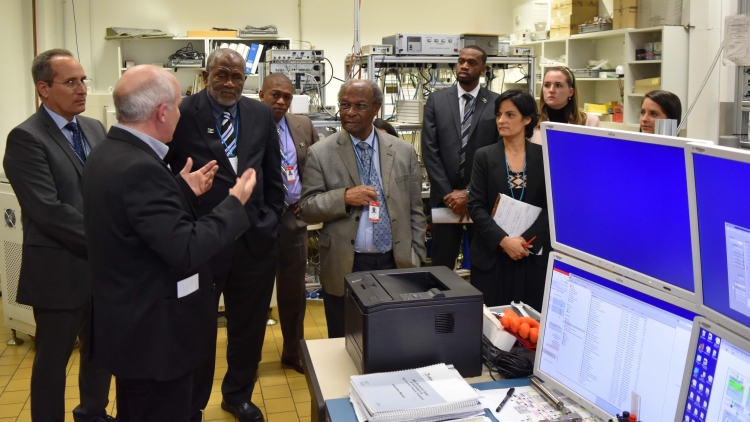 The CCCC delegation watches as an IAEA expert demonstrates applications of nuclear technology in water resource management during a tour of the IAEA Isotope Hydrology Laboratory in Vienna. (Photo: IAEA)

Dr. Leslie said: “the tools developed by the IAEA in Seibersdorf are very useful for the Caribbean region, especially with regards to improving crop resilience to face ever increasing temperatures, salt water intrusion and drought”.

Aspects of plant breeding and genetics are explained during the visit to the IAEA laboratories in Seibersdorf. (Photo: IAEA)

At the end of the weeklong visit, Dr. Leslie remarked that “the workshop has been an eye-opener on the role of the IAEA in sustainable development”.

Upon returning to their headquarters in Belize, the CCCCC plans to share the information on the work of the IAEA acquired during the workshop with stakeholders and countries in the region, with a view to advising national and regional policy- and decision-makers.

The IAEA, through its technical cooperation programme, assists its Member States in combatting climate change and its effects. Furthermore, the TCP  also helps countries in the region manage water resources and combat vector borne diseases such as malaria, zika and dengue, through the use of nuclear techniques.

The number of IAEA Member States from the non-Spanish speaking part of the Caribbean has been increasing steadily, with a total today of nine countries[1]. Saint Lucia, Grenada, and  Saint Vincent and the Grenadines are in the process of depositing their legal instruments for IAEA membership, and other countries from the region are expected to join in the near future.

By caribbeanclimate in News on November 15, 2017.
← GWP-C WACDEP Initiative on Climate-Proofing Water Investment in the Caribbean Request for Expression of Interest: Consultancy to conduct the Technical Feasibility Study for Transformation of the St. Kitts and Nevis’ Public Transport Sector to Electric Vehicles →