The International Union for the Conservation of Nature’s (IUCN) World Conservation Congress (WCC), ‘Planet at the Crossroads,’ opened on 1 September in Honolulu, Hawai’i, the US. The WCC will focus on the challenge of attaining the Sustainable Development Goals (SDGs) over the next 15 years. Over 6,000 participants from around the world are expected to attend the WCC, making it the largest gathering of environmental policymakers since the Paris Agreement on Climate Change and agreement on the SDGs.

The WCC is IUCN’s highest decision-making body and meets every four years to bring together leaders from government, the public sector, non-government organizations (NGOs), business, UN agencies and indigenous and grassroots organizations to discuss and decide on solutions to global environment and development challenges.

Among other objectives, the World Conservation Congress will launch the Hawai’i commitments: globally transformative and innovative conservation initiatives to meet the critical challenges and opportunities of our time, including the imperative to scale up action on biodiversity and the SDGs. The event will consist of the Members’ Assembly, which will deliberate on IUCN resolutions and recommendations regarding key conservation issues, and a four-day Forum with debates, workshops, dialogues, round-table discussions, training courses, music and exhibitions focusing on protected areas (PAs), natural capital, biodiversity offsets, ocean governance, oil palm expansion and ecotourism.

During the opening ceremony in the morning, Hawaiʻi Governor David Ige said an island is a “microcosm of Planet Earth,” and he announced the Hawaiʻi Sustainability Initiative. President Tommy Remengesau, Palau, said President Obama’s designation of the Papahānaumokuākea Marine National Monument “cements his legacy as an ocean leader.” Erik Solheim, Executive Director, UN Environment Programme (UNEP), presented the UN Secretary-General’s warmest congratulations and strong support, and reminded participants that “no task is too big if we act together.” IUCN President Zhang Xinsheng said the WCC is about moving the 2015 historical agreements to action. 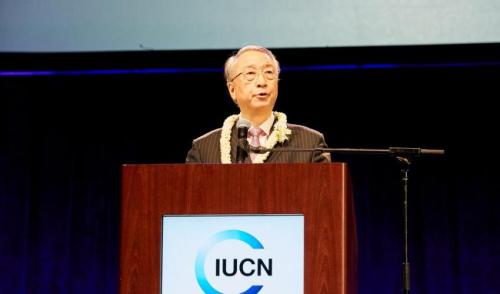 In the afternoon, Pacific Island leaders, governors and mayors from the cities and states on the Pacific Rim attended the Pacific Ocean Summit to consider the actions and commitments required for the establishment of the 2030 Pacific Ocean Partnership. On increasing ocean resilience, Aliki Faipule Afega Gaualofa, President of Tokelau, said “the Pacific Ocean is our teacher, our elder and our home,” further highlighting that ocean health is interdependent with quality of life and climate change. Henry Puna, Prime Minister, Cook Islands, emphasized that traditional approaches must be nurtured and integrated into ocean resilience efforts.

On 2 September, the Natural Capital Coalition, of which IUCN is a founding member, will unveil its recently launched Natural Capital Protocol to delegates.  During the session, participants will have an opportunity to sign an open letter of support for the Protocol that urges business everywhere to enhance their understanding of nature.  The new Protocol builds on and harmonises a number of existing approaches with the aim of helping business identify, measure and value their direct and indirect impacts and dependencies on natural capital, so they can make more informed decisions.

“The Natural Capital Protocol has the potential to be a game changer for conservation and business.  The next challenge will be determining how best government and civil society can support the uptake of this new tool within a sustainable development context,” said IUCN Global Business and Biodiversity Director Gerard Bos.

About 450 organisations provided input into the development of the Protocol, including more than 50 leading companies who piloted the draft version. The piloting programme included the Coca-Cola Company, Dow, Kering, Hugo Boss, Interface, Nespresso, Nestle, Olam, Shell and Yorkshire Water. Mark Gough, Executive Director of the Coalition, added: “Now that we have a standardized framework, it is time for action.”

Another session, on 4 September, aims to explore the impacts of natural capital valuation and accounting practices on local people’s rights to resources, cultural diversity, decision-making and governance, and environmental conflict.  Led by the IUCN Commission on Environmental, Economic and Social Policy (CEESP), the workshop, Matters of value: Natural capital, cultural diversity, governance and right, will highlight the different perspectives and concerns associated with placing monetary value on nature.

Then, on 5 September, Making natural capital accounting approaches work for conservation: creating the enabling environment to up-scale the use of the Natural Capital Protocol will feature a range of case studies from Tata Power, the Ecosystem Values Assessment & Accounting Project in Peru and the Ministry of Economic Affairs in the Netherlands.

Also on 5 September, a session on “National Capital Approaches: Identifying Common Ground and Fracture Points,” will be held to inform the development of the IUCN policy on natural capital, which will be decided by the Members’ Assembly.

By caribbeanclimate in News on September 2, 2016.
← Climate Change is affecting your cup of coffee 5Cs Daily Tip: School Supplies →