Green jobs boom: The frontline of the new solar economy

More Photos
While the price of oil is plummeting, taking with it a significant number of jobs, the renewable energy job market is booming. It is estimated that it will grow to 24m jobs worldwide by 2030 – up from 9.2m reported in 2014 – according to analysis by the International Renewable Energy Industry (Irena), which predicts that doubling the proportion of renewables in the global energy mix would increase GDP by up to $1.3tn across the world.

The rise and rise of the solar industry has been the largest driver of growth. In 2014, it accounted for more than 2.5m jobs, largely in operations, maintenance and manufacturing – now increasingly dominated by a jobs boom in Asia.

The industry is providing hope and income to workers – present and future – across the global south.

Although employment in renewable energy is comparatively low across Africa, the sunny continent is where the need and potential for employment is perhaps greatest. A fast-growing economy and population is driving demand for energy, but two-thirds of people in sub-Saharan Africa still lack access to electricity.

Now the renewables revolution is witnessing the rise of a generation of African “solar-preneurs” who are creating small-scale businesses by taking solar energy – in the form of lights, radios and mobile-phone charging facilities – into local communities. 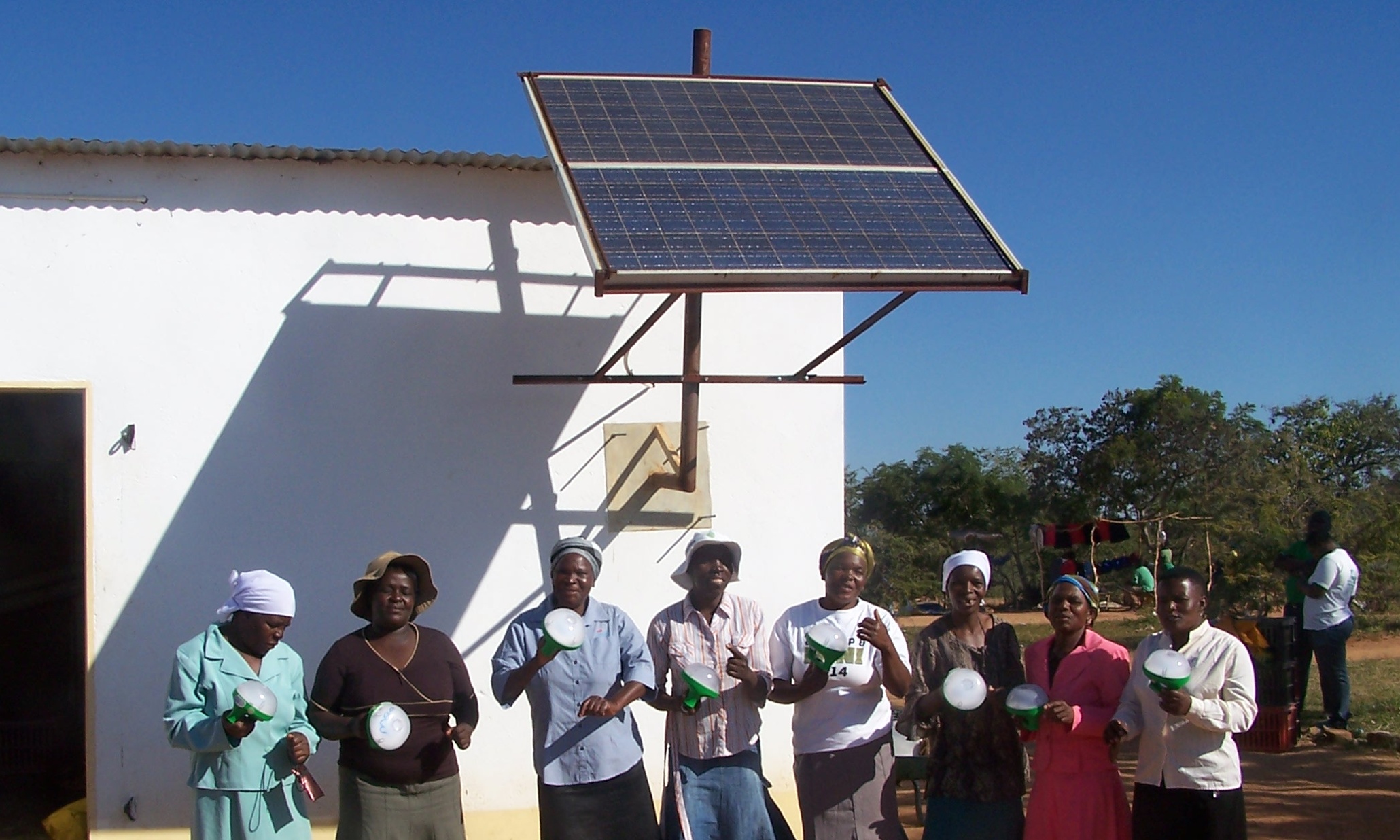 Solar is bringing a new world to women in Zimbabwe

In western Zambia, Sheila Mbilishi is self-employed and sells solar lights to local residents and businesses. The 67-year-old widow and mother of six buys the lights for $5 from the social enterpriseSunnyMoney – part of the UK based charity SolarAid – and sells them on with a 50% profit margin.

“They sell like cupcakes,” says Mbilishi. “There is life in the lights – people got interested in them.” They are popular with pupils who want to study after dark, businesses during electricity blackouts or as a replacement for toxic kerosene lamps in homes.

Since starting the business three years ago, it has provided Mbilishi with a significant source of income, helping her to open a shop and build a two-bedroom flat. “The difference is huge,” she says. “Selling lights has helped me a lot. I have built a house out of the lights. Owning personal ones has helped me too with the current load shedding – electricity is usually off and I am not affected by no light.”

For Shehak Sattar, choosing to study renewable energy was more a social than a personal decision. “I want to practise something different from the mainstream. It is related to the concept of believing in humanity and our survival on earth,” he says.

The 27-year-old Pakistani student is now four months into a masters degree in the science and materials of solar energy at the National University of Science and Technology in Moscow, funded by a scholarship. The course is in its first year and has mostly attracted international students – from Afghanistan and Iran to Nigeria and Namibia.

Before coming to Moscow, Sattar worked for NGOs and other agencies in Pakistan, installing and spreading the transmission of solar energy to remote communities and to slums in Islamabad and Lahore. Larger solar projects are now starting to come online in Pakistan, amid ambitions to construct the world’s largest solar farm.

“There has been a general electricity crisis in Pakistan. People are waiting for alternatives to rescue them from this suffering,” he says.

Once he has completed his course, Sattar wants to work at a university in Pakistan “to convert the attention of students to renewable energy sources” by lecturing and researching methods to make solar energy more efficient.

The promise of renewable energy in refugee camps could save humanitarian agencies hundreds of millions of dollars and provide job opportunities for thousands of young refugees.

Mohamed Abdikadir, 21, was born in the refugee camp complex at Dadaab in eastern Kenya, where the average family spends $17.20 per month – 24% of their income – on energy. The complex is home to more than 330,000 refugees.

Like most of his neighbours, Abdikadir’s family came to the camp after fleeing the civil war in Somalia more than two decades ago. Both his parents have since died, leaving Abdikadir to provide for his 10 younger siblings. He is now one of 5,000 young people trained to install solar panels as part of a programme in Kenya and Ethiopia organised by the Norwegian Refugee Council (NRC), which has recruited local teachers to deliver it.

“It was hard [to learn] at first but I tried my best and now it is easy,” says Abdikadir. After completing a six-month programme a year ago, he gets up at 5am every day to pray before preparing breakfast and collecting the tools for his job in Dadaab’s dry desert landscape. “There is a lot of sun here.Renewable energy is very good in this environment.”

Before he started the programme, Abdikadir earned money by selling water but he could only make enough to provide one meal a day for his family. Now, with the extra income from solar installations – $10 on an average day – his siblings are eating three meals daily, have new clothing and are able to attend a fee-paying school.

“I am the breadwinner of the family,” he says. “[The programme] has really helped me. Before I was idle. It helps with my daily bread, my daily income.”

Abdikadir now wants to expand his education to incorporate other forms of renewable energy. Meanwhile, the NRC recently announced plans to deliver a similar programme on a larger scale for Syrians at Zaatari refugee camp in Jordan.